SEMPORNA: A plan to build Malay­sia’s first and biggest oceana­rium resort of luxury chalets in Mabul, in the east coast of Sabah, is facing a wave of opposition. Environmentalists, villagers and dive operators warn that the proposed project on a 33ha parcel of shallows will bring disaster to Mabul marine life and may also degrade the eco-sensitive coral reefs of Pulau Sipadan, a 20-minute boat ride away.
Application for a 99-year lease for the parcel facing south of Sipadan was first put in by a local company based in Kota Kinabalu in September last year. Unspoilt, for now: The parcel of 33ha of shallows at Mabul where the oceanarium is approved to be constructed. The island in the background is Sipadan. 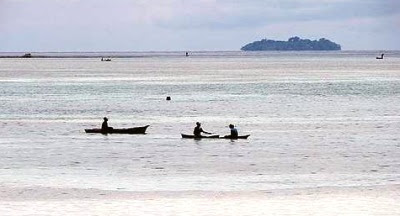 The Semporna Assistant Collector of Land Revenue approved the application early this year and the Sabah Cabinet endorsed it last month, according to state officials. They said the project was supposed to be undertaken by a local and Japanese joint venture based on an environment-friendly building concept.
Work will only commence after a thorough study of the environment impact assessment report. The sources added that the oceanarium would be surrounded by five villages of more than 200 sea-view bungalows and semi-detached villas, with side pools and spa villas as well as staff and scientist quarters.
Sabah Environment Protection Association president Wong Tack asked if the oceanarium was necessary because one could easily see fishes swimming in the clear Mabul waters. Tourist attractions: Holiday chalets on Mabul island. Dive operators believe that the existing chalets in the area are enough to cater to tourist needs.“How can approval be given to such a massive project before the terms of the EIA are known?” he asked.
Citing scientific studies of corals in tourism islands such as Fiji and elsewhere, Wong said any major construction activity in the shallows is bound to have negative impact on the reefs. He added that tonnes of construction material would have to be brought in by barge and sand pumped in from the shores of the island, thus heavily impacting the rich exotic Mabul marine life.

Wong said the authority that approved the resort project should remember what happened in Sipadan in 2006 when a construction barge ran aground, destroying a coral reef patch the size of three tennis courts and putting Malaysia in a bad light.
He said the existing four resorts for higher-bracket tourists and five to 10 home-stay places for backpackers with a total of more than 250 rooms provided enough accommodation for 120 divers given permits to dive in Sipadan waters every day.
Wong said the 2,000 local Bajau and Suluk villagers living on Mabul island were also worried about relocation and that their historic grave site would be removed to make way for the oceanarium resort project.
Concern over Mabul resort plan
By P. KATHARASON
Source:
http://thestar.com.my/news/story.asp?file=/2008/11/16/nation/2491918&sec=nation
READ ALSO.......
Lim Kit Siang
http://blog.limkitsiang.com/2008/11/18/is-malaysia%e2%80%99s-first-and-biggest-oceanarium-in-mabul-necessary/
Posted by Senjaliza at Sunday, November 16, 2008 3 comments: