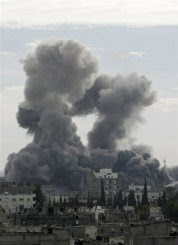 OIC-Gaza-Condemn Secretary General of Organization of the Islamic Conference (OIC) Ekmeleddin Ihsanoglu on Saturday strongly condemned massive killing of Palestinian people in Gaza Strip by the Zionist regime. Issuing a statement, Ihsanoglu called Palestinian massacre in Gaza as a clear violation of international law and Geneva Convention.
He also called for emergency meeting of the OIC executive committee at the ministers level to consider Zionist regime crimes in Gaza. OIC secretary general has also called on international organizations to stop Israelis crimes in the region. The Zionist regime in a wide air strike on Saturday morning killed 195 palestinians and wounded more than 250.
source...
http://www2.irna.com/en/news/view/line-203/0812278806220116.htm
Posted by Senjaliza at Sunday, December 28, 2008 No comments:

OVER 4,700 MALAYSIAN TO LOSE JOB IN NEXT 3 MONTHS: MINISTER

More than 4,700 Malaysians will lose their jobs in the next three months as the electronics sector is hit by the global economic downturn, the country's human resources minister has warned.
S. Subramaniam told state news agency Bernama that 102 companies had informed the Labour Department that 4,749 workers would be put out of a job between January and March, with most coming from the electronics sector. "We cannot stop companies which are making losses from retrenching their workers. But we will do all we can to aid these workers to receive their compensation," he told Bernama late Monday.
"I am very thankful that the workers' unions here have not been violent, unlike in other countries, that they have been quite calm about all of this," he added. Subramaniam told Bernama his ministry had set up an action centre at every district to monitor companies or employers who might be facing financial difficulties. "Our officers will visit these companies and compile a weekly report which would be sent to the state and finally be compiled at central level. This would enable our ground force to ensure that the employers will meet their obligations towards their workers," he added.
He said the workers included 1,500 at hard-drive manufacturer Western Digital, which announced the losses last week at its plant in the eastern state of Sarawak on Borneo island. Malaysia's electronics sector has been hit hard by a drop in global demand for electrical and electronics goods, with the government announcing a 7 billion ringgit (2.01 billion dollar) stimulus package to reinforce the economy and maintain growth momentum.
Source:
http://news.my.msn.com/topstories/article.aspx?cp-documentid=1860044
Posted by Senjaliza at Sunday, December 28, 2008 No comments: