Gaza diary: Are we not human? 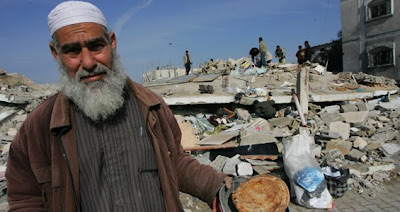 Gaza diary: Are we not human?
By Mohammed Ali in Gaza City
Many Gazans feel hopeless in the face of the Israeli bombardment [GALLO/GETTY]As the death toll from Israel's war on Gaza continues to climb, Mohammed Ali, an advocacy and media researcher for Oxfam who lives in Gaza City, will be keeping a diary of his feelings and experiences.
Are we not human?
The air, the sea and the earth in Gaza City are now occupied by the Israeli military. They occupy Gazans' minds, nerves and ears too. In a bid to stop my children twitching, jerking, trembling and waking at every sound of an attack during their few hours of sleep and their many waking hours, I put cotton wool in their ears - it has not worked. I wonder what damage is being done to my children's tiny hearts. Theirs are not as big as mine, they can cope less with the stress that is being put on them.
IN DEPTH
We ran out of fuel for our generator, which meant that we were confined to a small room filled with eleven people, with little light for three days. We have not had water either; our well can only pump water if it has electricity which most of the Gaza Strip has been denied since this nightmare started.
Unlike many other families, we were fortunate yesterday to find 20 litres of benzene to power our generator. No fuel has come in since the onset of this attack on Gaza so we had to pay seven times its usual price.
We have one day's worth of food left and the nappies I bought two weeks ago are nearly gone. They are not good quality as little has been able to enter this strip of land since the blockade was imposed on us 18 months ago. Bad quality nappies mean unpleasant leakages, and for the last few days the little ones have had to be bathed in freezing cold water.
My sister who was with us the last time I wrote decided to return home in spite of our protests. She feared that with food reserves running out we might have to eat one meal a day rather than the two we have been having of late. At home she has a little food left, enough to keep her and her family going for a while longer. We are now 11, huddled together in my parents' dining room. My brother and I and our families moved there, thinking that the first floor may be the safest option. There is a saying in Arabic which says "death in a group is a mercy". I guess if we die together maybe, just maybe, we will feel less of the pain than in doing so alone. I have had 8 hours sleep since the beginning of this conflict; we can hear attacks almost every minute.
I think to myself, if one of us is injured or needs medical attention what will happen? Ambulances are finding it difficult to reach civilians, roads are blocked by rubble, Israeli forces in their path - you could bleed to death. Even if they did get to us, maybe we would be bombed on our way to the hospital. If we did reach the hospital there might not be enough room to treat us - there is little medication or equipment or any electricity to fuel the life-saving equipment. We would not even be able to get out of Gaza for the life-saving treatment we needed.
Hospitals are now running on back-up generators making life even more difficult for the doctors who are trying to cope with the influx of the injured. If fuel runs out for the generators, those on life-saving equipment will perish.
I heard a woman calling into a radio station today - ambulance services could not reach her and I guess she thought the radio station might be able to do something. She was wailing down the phone "our home is on fire, my children are dying, help me". I do not know what happened to her and her children - I do not want to imagine.I spend much of my time thinking that this could be the last hour of my existence. As I try to fall asleep, I hear on the radio the numbers of people who have died rising by the hour. I wonder if tomorrow morning, I will be part of that body count, part of the next breaking news. I will be just another number to all those watching the death and destruction in Gaza or maybe the fact that I work for Oxfam will mean that I will be a name and not just a number. I might be talked about for a minute and moments later forgotten, like all those other people who have had their lives taken away from them.
I am not afraid of dying - I know that one day we all must die. But not like this, not sitting idly in my home with my children in my arms waiting for our lives to be taken away. I am disgusted by this injustice. What is the international community waiting for - to see even more dismembered people and families erased before they act? Time is ticking by and the numbers of dead and injured are increasing. What are they waiting for?
What is happening is against humanity, are we not human?
FROM AL JAZEERA...
http://english.aljazeera.net/focus/war_on_gaza/2009/01/200917111341829322.html
Posted by Senjaliza at Sunday, January 11, 2009 3 comments: